It was a surprise to see the restaurant was quite empty, especially for 8pm on a Saturday night. We had made a reservation as we were celebrating our 3 month anniversary and didn’t want to miss out, this was not at all necessary.

As we tend to do, Darryn and I significantly over-ordered. We always forget the rather large size of Indian servings, however this meant that we had more dishes to taste. It also meant we had leftovers to take away, a fact that greatly excited hungry Darryn the next morning. 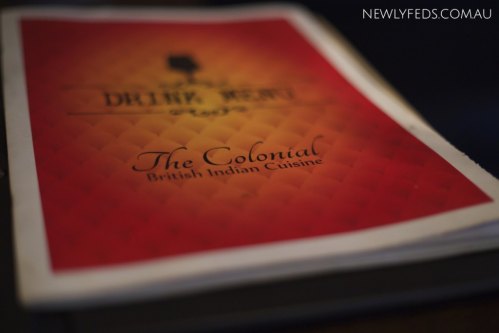 Cocktails
These were quite a disappointment, I will give props for the effort gone into designing cocktails that were interesting and with an Indian flavour, but it just didn’t work.

I have been to The Colonial before, for my hens party (if you must ask), and was completely delighted by the Tamarind Martini. It was dry, tangy and the woman serving me was so proud of her addition of Blue Curacao to the bottom of that cocktail that it was very difficult not to enjoy the whole experience. 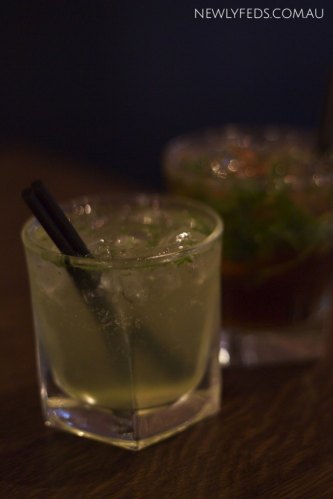 After attempting to order the Tamarind Martini again, only to hear that they were out of tamarind (at an INDIAN RESTAURANT!) Darryn and I ordered the Corrito and Vodka Shikanjvi. Both sounded promising, the Corrito boasting Bacardi Rum, muddled lime, coriander leaves, Indian spices and Tobasco with ice and Coke. This was the barely drinkable of the two. Those who know Darryn and myself know that we can handle our chilli, a fact we will address a little later, however this drink had the burn of drinking a six-pack of Matso’s Chilli Beer to yourself. I said to Darryn at the time that it was “like drinking a winter cold”. The one redeeming feature was the limey mojitoeque  taste that followed.

The Vodka Shikanjvi, with Absolut Vodka, lime, mint, and Indian spices, was something we were not willing to drink any more than a couple of sips of and this was only to try and identify why it tasted so familiar. This drink was sweet and salty, really salty. Darryn likened it to Indian chips in a drink, a taste that he dislikes. I, on the other hand, found it reminiscent of Ayran, a salted yoghurt drink from Turkey, or a very salty salted lassi. Unable to finish the staff were kind enough to remove the cost of this cocktail from our bill.

Giving up on cocktails, we were relieved when our Kingfishers arrived; from here it was all positive. 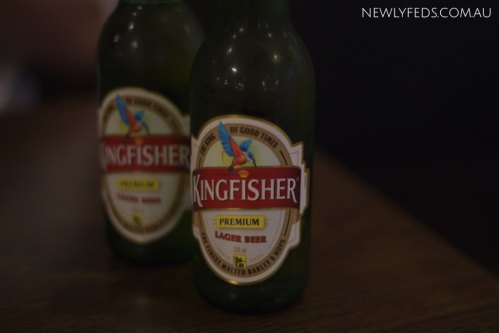 The Meal
The food was amazing, each dish had its own flavour, there were levels to each of them and they tasted like the fresh herbs and spices used to make them. A real delight in Indian cuisine.

We will start with Garlic Naan and Pulao Rice, get these out of the way and onto the really tasty stuff. The naan was a little disappointing, given last time it was so hot and fresh, it seemed pretty cold and not as toasty. That being said, it worked to our favour as it meant we could leave room for our mains. The rice was a great base to the strong flavours that we drenched it with; a great long grain and nicely separated. Next time we will have to try the Pea Pulao, an alternative rice base, chock full of green peas. But enough about these… 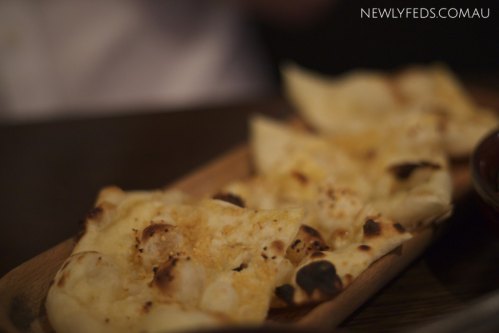 As we ordered, the waitress asked if we wanted our dishes mild, medium, or hot and (as we always do) we asked for hot. There was a small gasp and eye-widening from our waitress as she double checked our request, before suggesting we order some raita for the side. This led us to believe that perhaps ordering hot was a mistake, but we stuck with it as often people underestimate our “chilli bone” as Darryn calls it. As we ate our meals, not bothered by chilli, we pondered whether our request for hot had been ignored, for our own good, or whether we are just powerful and were underestimated. 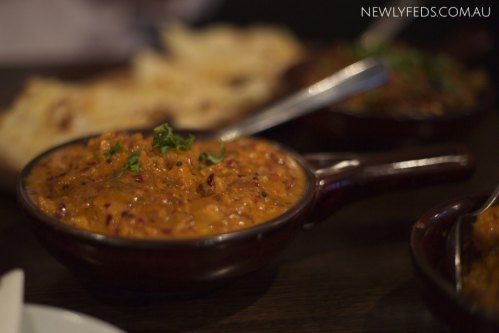 Goan Fish Curry is a dish that Darryn cooks at home, and while this was not as good as hubby’s, it was quite wonderful. The fish did not have a very fishy taste and separated nicely to be coated in the marvellous gravy. Not as coconutty as I have had elsewhere but the subtlety of the fish lent itself to a less intense gravy. 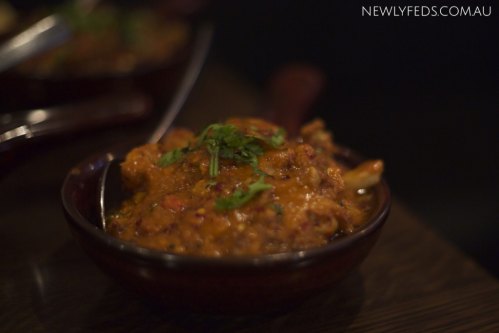 Kandhari Gobi was our attempt to steer away from Aloo Gobi (one of my faves) and try something at least a little different. It turned out to be quite close in taste to Aloo Gobi just without potato. Perhaps cauliflower serves as some great equaliser in Indian cuisine. Regardless, this was a great dish. Not very much gravy in this one, enough to coat the cauliflower and pick up a little rice. 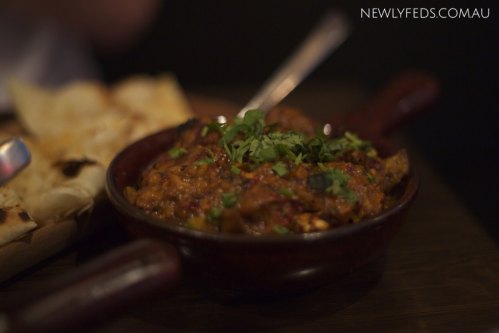 Pumpkin Masala was spectacular. The pumpkin was caramelised on the outside giving the dish a delightful sweetness. This dish turned out to be the hottest of the four, not by any means overwhelming, still allowing the pumpkin flavour to command each mouthful. Darryn thought this was the best dish cold the next morning. 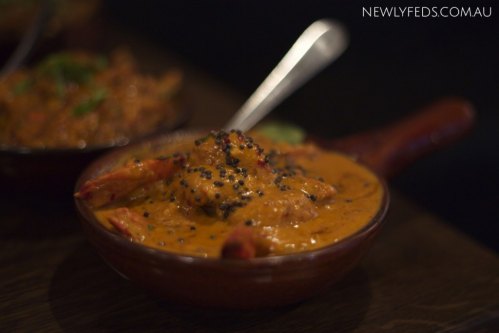 Kochi Prawn was my absolute favourite and that is saying a lot given how much I enjoyed the other mains. The prawns were huge and tasty, really tasty! The gravy was coconutty and sprinkled with curry leaf and mustard seed tarka that not only lingered in our mouth but got stuck in our teeth, which turned out to be quite enjoyable. 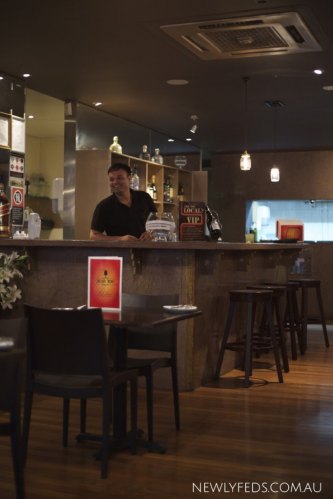 Pros:
The quality and freshness of the food
Meals and drinks were served quickly but not in a pushy manner
Clean and comfortable atmosphere with lovely wait staff

Cons:
Music was a little too loud (it was turned down later in the evening)
The garlic naan was a little cold
Cocktails not up our alley